When do the new DVDs drop?


Wont' Back Down: The Steve Peat Story

-Footage and editing incredible Definitely on The Collective level.

An inspirational mountain bike film about the best riders in the world doing what they love, riding bikes. Whether they are on their downhill bikes, motos, hardtails or BMXs they radiate an infectious passion for bikes and a love of the lifestyle that comes with them. Featuring Steve Peat, Greg Minnaar, Sam Hill, Josh Bryceland, Brendan Fairclough, Steve Smith, Andrew Neethling, Filip Polc, Ben Reid, Danny Pace and many more MADE captures in stunning high definition the essence of a life of traveling, racing and riding that we all dream of.

See the 2009 World Cup season and the emotional scenes at the World Championships in Canberra unfold with insight from the leading figures in Downhill racing.  Great excuse for a party!

Watch for james on his 2010 Norco Rev shredding comps, parks, and street near you!

Well it has been shrouded in mystery, but it is true, there will be a Dirt race team for 2010.
Ben Reid and Dan Stanbridge will be representing Dirt on board Norco bikes giving you the “Dirt Norco Race Team”
All we can say now is watch this space. Stanny, Ben and Ali (team mechanic) have been working hard to organise everything from sponsorship to kit design, and the fitting out of a 26ft team bus. 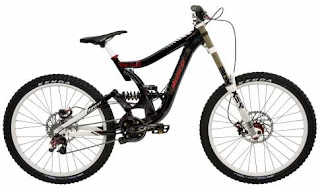 Everyone at Dirt HQ is excited about the team and once everything is finalised (kit designs are almost finished and will be released along with a list of co-sponsors very soon) you’ll be the first to know. 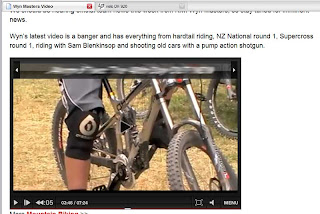 I suspect so. I was watching Wyn's new edits and the bike at 3:46 sure looks like a La pierre velo dh 920. Hmmm could be the french based company is hiring an all New Zealand roster for its DH team.

Are Wyn Masters and Sam Blenkinsop teammates?
Let's watch and see what gets announced over the next coming weeks...

This is a 30 minute vidder, so grab your preferred beverage, hit full-screen, and watch some fast guys from south-western England shred some berms and get some air miles. 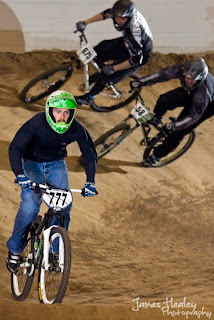 Resident rabid 4x proponent Kyle here to remind you that the Pipeline Indoor 4x season at the Abbotsford Indoor BMX track is ready to pick back up this week! Intense gated action resumes on the 16th!

While I may be out for blood, a red haze clouding my vision coming out of the first berm, my opponents left weeping, and much gnashing of teeth (do they have a smack talk award?) the whole idea is to have some fun on a bike in a nice, dry spot with a bunch of fellow mountain bikers.

Check the race reports from the previous races here, here, and here.
Posted by dirtwest at 10:54 PM

We were on Eagle mountain this week.

If you only love trails circa 1999 you'll love eagle!
Trail builders are rebuilding old trails in old-skool style.

Eagle has one of the longest hikes of all the local mountains. It has amazing potential in terms of terrain and possibility for cool features. Unfortunately, builders on Eagle have a different view of what 'good trails' are. 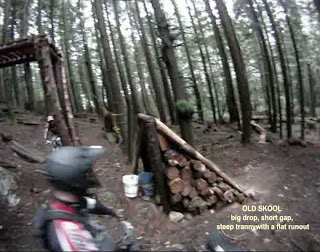 Isn't it 2010? This landing was so steep, that it couldn't hold dirt on the slope. Hopefully that gets destroyed tweaked.

The controversial man behind Bike Rescue is done. A judge handed down a two year jail sentence after Gordon Blackwell pled guilty to 36 charges of possession of stolen property and one count of theft.

If your bike was stolen in the past year and a half or so, it's worth an e-mail to nvstolenbikes@rcmp-grc.gc.ca with the year, make, model, colour, and any unique features. A picture or serial number would be a good idea, too.

These dudes kill it

One day with Marius Hoppensack, Jonas Berndt and Hendrik Tafel at the indoor skatepark in Heerlen -from icetv
Posted by dirtwest at 10:44 AM