It just means you have to work harder to get some quality riding time.


In this case we had to work very hard: 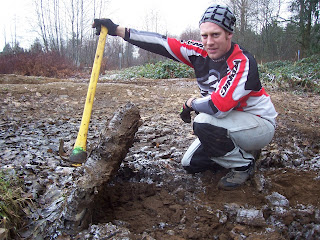 "this stuff was covering everything"

is week we were on Burke

Got a new Go Pro HD Hero over Christmas break. Here's some of the first footy I shot:

Just make sure you get new batteries for your camera. 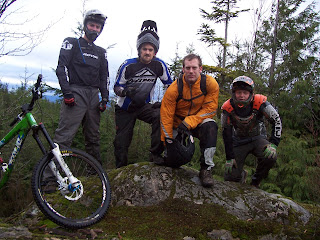 We went to Sumas this weekend. Fun stuff.

Well, it seems like robots have taken over mountain bike media.


I say "All hail our new benevolent robot masters"

These aren’t your tradition Suspension Forks, they basically act like a rigid fork that have some give under really hard landings, pretty sweet idea so you don’t loose your pump when you hit the transition.

This is the ideal dirt jump fork, super stiff and rigid when you're flowing a rhythm section or doing tech tricks but takes the edge off really hard impacts and saves your bike and your wrists.


order yours today!
Posted by dirtwest at 3:32 PM

Here's an edit from our cold and icy day on the Shore.


Oh and in exciting news:

We had a meeting December 9th with the City of Surrey regarding Invergarry becoming an official bike park.

We sat down at City Hall with pizza, sodas and many different individuals from the city, as well as passionate cyclists from the Lower Mainland. In attendance were: The manager of Delta Bike Co/Surrey. Jordan Proctor, Kai Bradley, Mark Godard, Derek Kost, as well as a number of city officials including; Doug Mossey, Jeff Graham, Nadia Chan, Tinna Mack and Jay Meneely.

The City has informed us there will be an Open house held in January 2010. The purpose: To put the idea of a bike park in Invergarry up for public debate. We have a couple of small hurdles before the bike park can be built; One: An environmental assessment needs to be completed for the area. Two: the City needs to understand that bike parks need to be treated the same as skateparks.

Currently, the City wants us to form a non profit group 'North Surrey Off Road Cycling Enthusiasts' to Insure the designs, and maintenance of the new bike park facility at Invergarry. The problems with this Idea are: A non profit organization shouldn't be responsible for Insurance of designs and maintenance of a City facility. It simply does not make sense. This is especially true when you consider an equally hazardous sport such as skateboarding. Skateboarders don't need to form a non profit groups nor are they responsible for Insuring City skate parks. Lastly, a non profit group already exists in Surrey: SORCE (Surrey Off Road Cycling Enthusiasts). Sorce was offered the ability to participate in the process of creating a bike park at Invergarry. They declined the offer as they wish to continue their sole focus on the South Surrey Bike Park.

That's the update for Invergarry for now.

We are optimistic we will be given a small portion of this former construction waste dump to use as an official Bike Park. It's almost showtime! January is only a month away.
Posted by dirtwest at 5:44 PM

Fogelsode #5: Funspot and Forest Freeride from Jack Fogelquist on Vimeo.

Just a Heads Up!

We have been contacted by the city of Surrey to pursue a Bike Park at Invergarry Park in Surrey. This is exciting news as Invergarry park has been an informal bike facility for a very long time.

We have been informed this project was originally offered to SORCE (Surrey Off Road Cycling Enthusiasts), however they declined any involvement in Invergarry. We have been told SORCE is not interested in participating in any cycling projects outside of the South Surrey Bike Park. No matter, we are happy to be involved!

Just a heads up:

Our meeting with the City of Surrey is set for December 9 2009. We will keep you posted.
Posted by dirtwest at 5:07 PM

These here be some big jumps. Sideflight champs to be crowned!


Both places are sick.

Kev and Yanto ride the unit, and indoor pumptrack in the UK
Posted by dirtwest at 10:37 AM

It's chilly out, and perhaps you don't want to turn yourself into a popsicle trying to hit up a night ride. Well there just so happens to be a wicked place out in Abby to get your bike on - the Pipeline Indoor 4x Series!

This Thursday December 3rd is the final practice night before the winter break! It's also your last chance to enjoy the track that has been putting the hurt on your quads out of the gate. Come January, a new, minty fresh track with new challenges will greet riders.
There's still four more races left in the series, and more people equals more fun! After the near-shameful showing the open men's class put on this Tuesday (not even enough people to run a quarter final!) I expect hordes to show up come January. I realize that racing may not seem the most compatible with the beer-swilling, Longhorn-sitting, freeride lifestyle, and you'll probably sweat and be out of breath if you're trying, but riding bikes is fun! If you've never tried a bit of friendly competition, it's well worth it.
Check the race reports from Race 1; Race 2; and Race 3, and the rules and schedule if you've never come out.